Macrame is enjoying its moment in the spotlight again after decades in craft exile. It's a really satisfying craft and the knots are easy to pick up. I've put my own twist on the traditional hanging potted plants and created a macrame hanging vase. You can use cords in any colour, but for this project I prefer white, so that you add coloured flowers you can change the whole look.

Don't be put off by the complicated-looking knots - it really isn't that hard, and this tutorial uses only three basic techniques. So let's start... 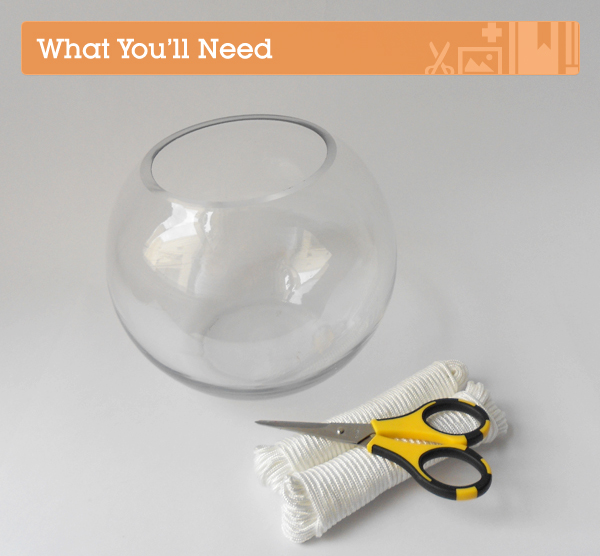 Step 1: Measure and Cut the Cord

Set aside the two shorter lengths of cord. Group the eight lengths so the ends align. Fold them in half and mark the center with a piece of tape.

Hold the cords about 6cm down from the fold. Take the 80cm cord and hold it parallel to the main cords, with a tail of about 12cm below your grip. 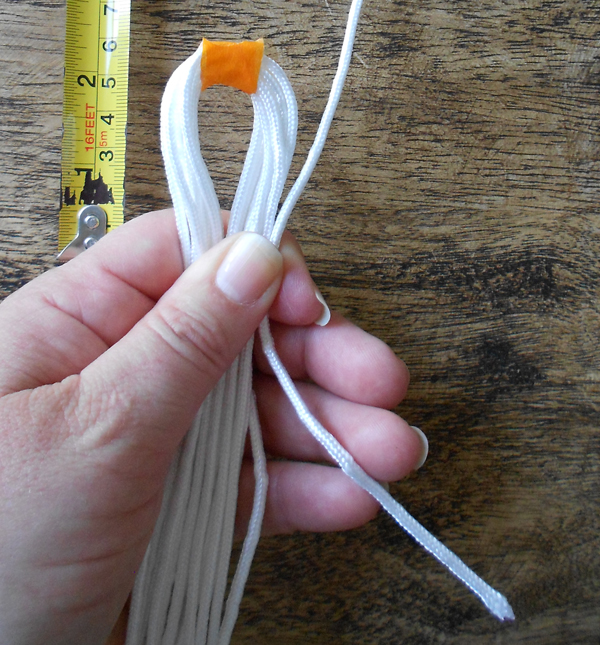 Make a loop out of the long section of the new cord and wrap the cord around the back of the main cord group. Keep your thumb on the short tail (I lifted mine off for the photo).

Continue wrapping the cord around the main cord group and over the loop, working your way up. The wrap should be firm but not too tight. Make the loop bigger if you need to. This adjustment will make the tail shorter. 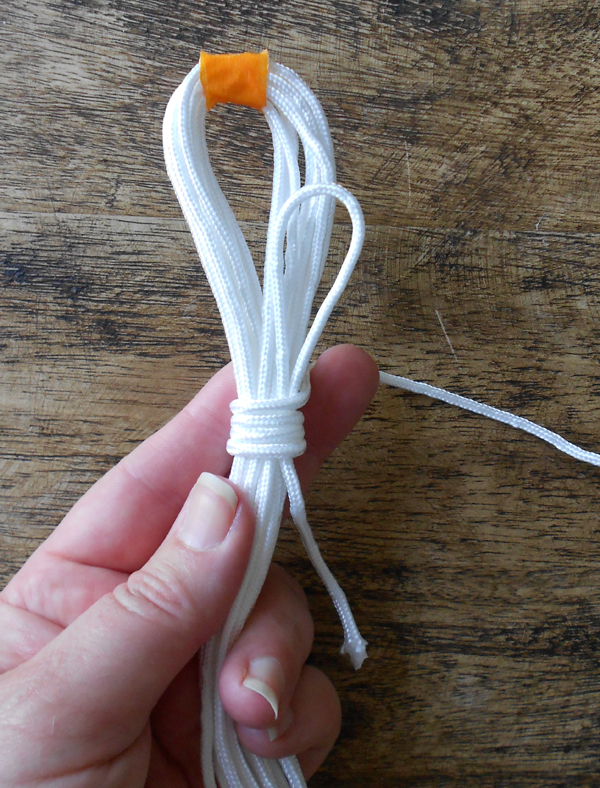 Wrap around 13 times then thread the cord through the loop and pull down on the short tail (the one at the bottom of the wrap which you've been holding with your thumb) to shorten the loop. 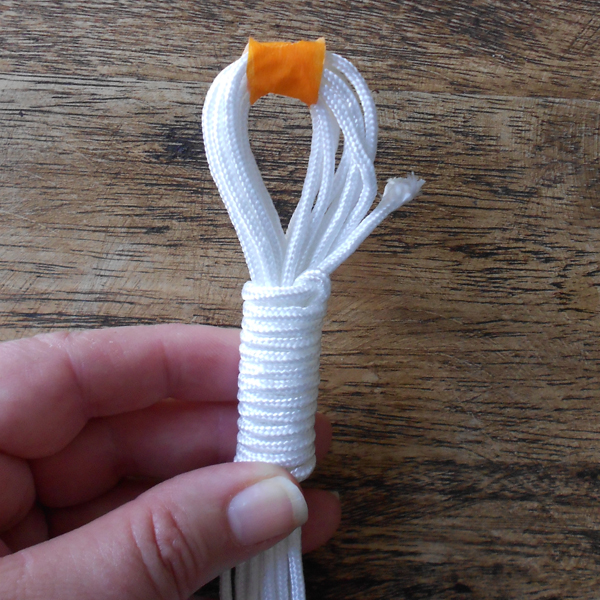 Continue to pull slowly on the short tail. The other end of the cord will get pulled into the wrap. If your wrap is too tight the cords won't pull through and you'll have to start the wrap again and make it a bit looser. Stop pulling when the two cords that overlap get to the centre of the wrap. Cut both ends of the wrap cord close to the wrap so they can't be seen. 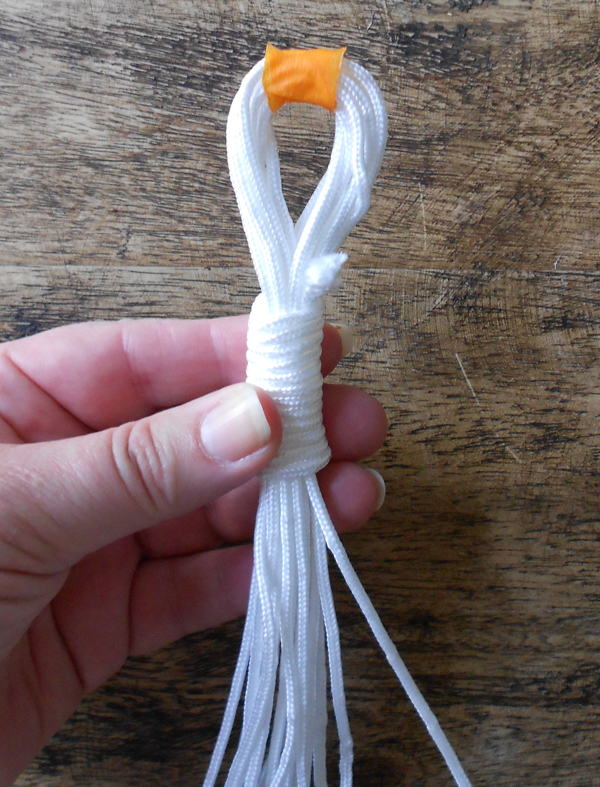 Divide the cords into four groups of four cords. Wind up and separately secure the ends of three of the groups with tape. 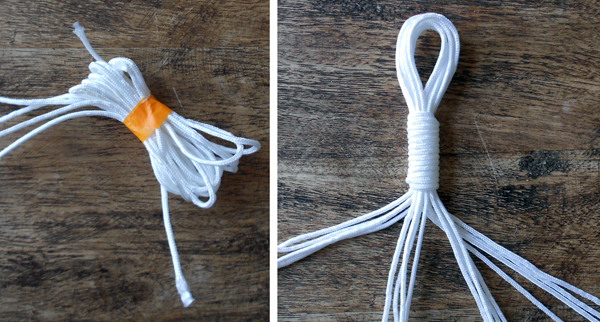 Taking the unsecured group of cords, measure  29cm (11.5 inches) down from the wrap. Mark the measurement with a piece of tape and tie an overhand knot (that's just an ordinary knot) under the tape. To make sure the knot ends up in the correct place, tie it loosely then slide it up into position before tightening it.

Then take cord four and fold it under cord one and behind cords three and two, then up through the loop created by cord one. Push it up so it's right under the large knot and pull both ends so the knot is firm. That's called a half-knot twist.

Continue making half-knot twists the same way - always starting with the cord on your left. As you do this the knots will form a twist and become a half-knot sinnet. Stop when you have made 12 half-knot twists. Repeat with the remaining three groups of cords. 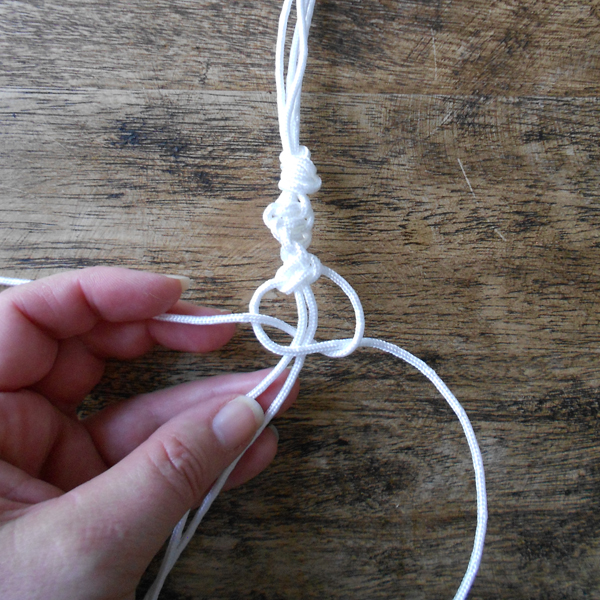 Measure 9cm (3.5 inches) down each cord group and mark with tape. Tie an overhand knot under the tape.

Now we are going to join two cord groups which are next to each other. Lay them side-by-side and separate out two cords from each group. They will now form a new cord group. 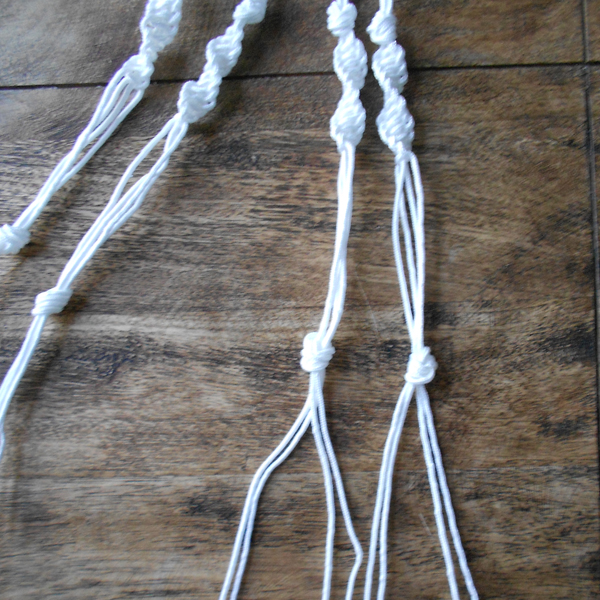 It's been very easy so far hasn't it? So now we come to the Josephine knots. They are a bit trickier, but easy once you've done one.

To make sure your finished knot is flat keep the cords flat as you tie them and don't let them overlap. (You can see in the photo above that the cords on the right of the knot are overlapping. I flattened them out before pulling the knot tight.

Start with the two cords on the left. Form a loop with the cords going behind (photo below left). Bring the two right-hand cords over the top of the loop (photo below right).

Loop the right-hand cords under the bottom-left cords and hold them in place with your left hand, then back up and over the top-left cords (photo below left).

While your knot is loose move it into position - it will be 7.5cm (3 inches) below the overhand knots. Flatten the cords so they sit next to each other and pull the two ends until the knot firms up.

Continue dividing and joining each cord group to the next one with Josephine knots. To ensure your macrame hanger hangs properly when you're choosing which groups to join together, look up at the wrap to see which ones are next to each other. For the fourth Josephine knot, you'll be joining the two cords on the left with the two on the right (see the photo directly below).

Step 8: Make the Basket Base

Now we are going to divide the cord groups once again. Measure 15cm (6 inches) down the new cord group and mark it with tape. We'll be tying three square knots which are a variation on the twist knot.

PART ONE. Begin the same way as the twist knot: Pick up the left-hand cord (cord one) and fold it over the top of cords two and three, then under the right-hand cord (cord four). Then take cord four and fold it under cord one and behind cords three and two, then up through the loop created by cord one. Refer to the photos in step five - you've just done a half twist knot. The second part is what forms the square knot.

Repeat the whole knot (i.e. parts one and two) three times. Then repeat on all four of the new cord groups. 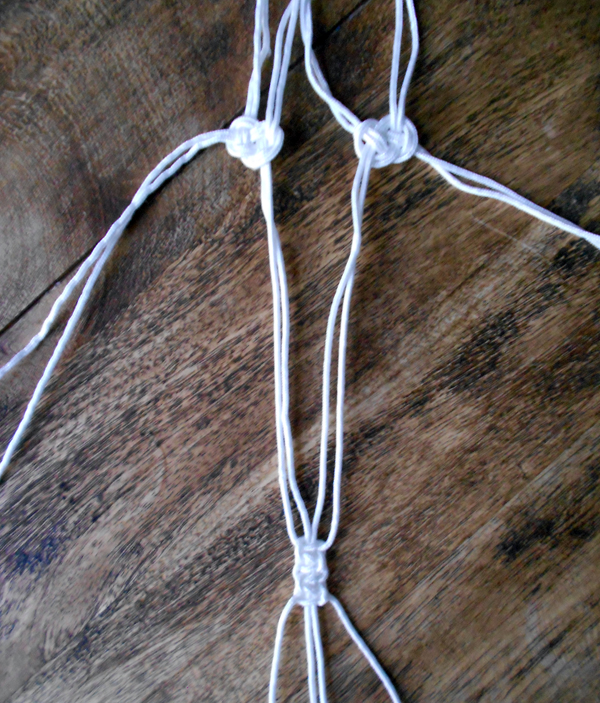 Step 9: Join the Basket Base

This is where it becomes a bit fiddly because you'll be bringing all the cords together at the base. Divide the cord groups one last time into four new groups of four, remembering to group the ones that naturally hang next to each other. Laying your macrame flat on the table or hooking it over a door handle will help.

Tie one square knot (refer to step eight) on each of the four new cord groups. 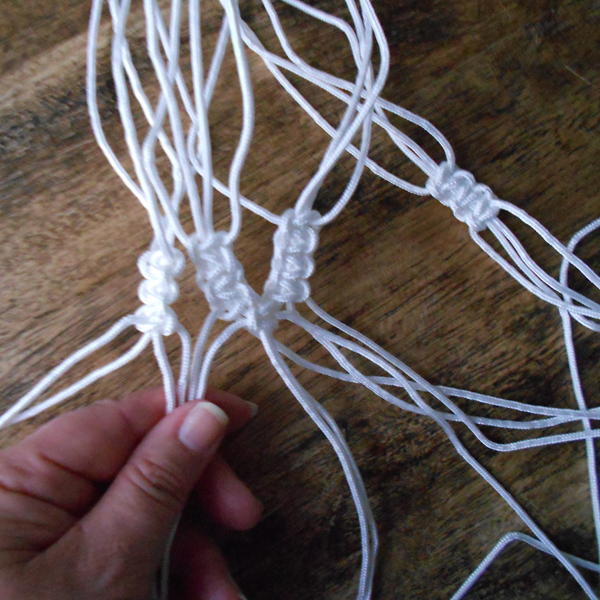 All the cords will now come together at the base.

Take the 1.4 metre cord and wrap the bottom of the hanger. Start the wrap about 6.5cm (2.5 inches) below the last square knots. The cord is wrapped around about 18 times, or until it reaches and fits snugly against the last group of square knots. Follow the instructions in step three to make the wrap. 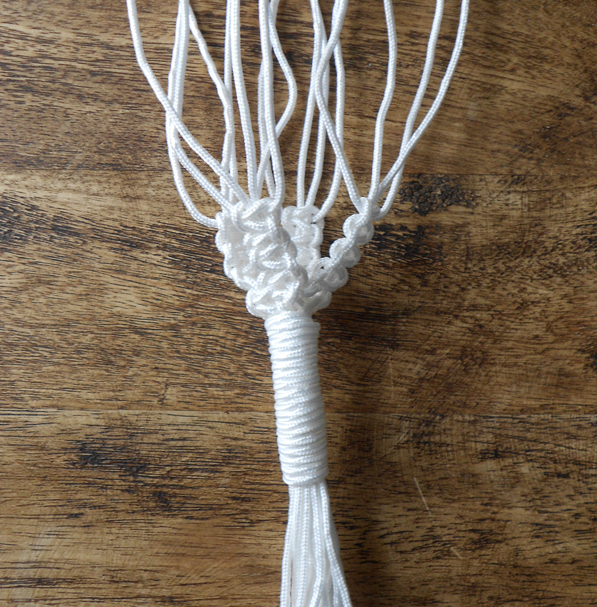 Cut the cords to different random lengths and tie an overhand knot close to the end of each one.

Put water in your vase and arrange the flowers. I chose small blooms and cut the stems short so they are contained in the vase. Longer stemmed flowers and leaves trailing over the sides would also look great. Hang the macrame hanger from a hook or a picture rail. Then open up the space in the basket and place the vase inside.

Stop and smell the flowers. 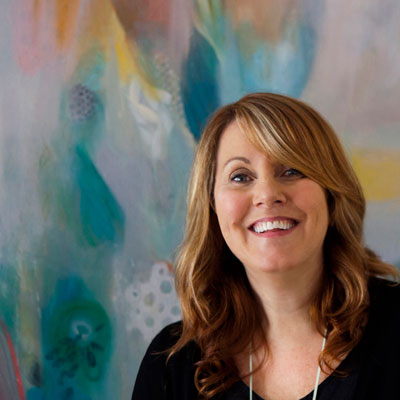 Lisa Tilse
Hello! I’m a designer, maker, blogger and a sometime-stylist. I’ve always been drawn to creative expression and I love making, crafting and being surrounded by beautiful things. I design sewing patterns and kits as the red thread and I'm always making or thinking about creating the next craft project to share. My blog the red thread is all about sharing things I find and craft tutorials I create. My digital magazine, SCOUT, is all that and more. It makes me happy to think that I might inspire others to live a more creative life too.
Weekly email summary
Subscribe below and we’ll send you a weekly email summary of all new Crafts & DIY tutorials. Never miss out on learning about the next big thing.
Advertisement
Translations