If you thought mobiles were just for kids' rooms, think again. This mobile of polyhedron paper shapes is a beautiful sculptural addition for any room of your home. Choose colours to suit your space and hang it from the ceiling - or even on a wall. 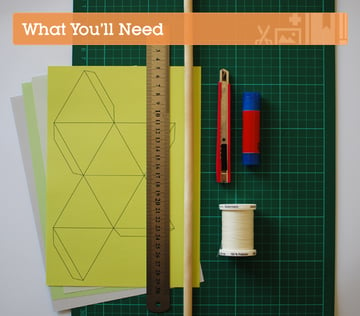 Download and print out the template onto the 15 sheets of coloured paper.

Cut around the outside of the printed shape. 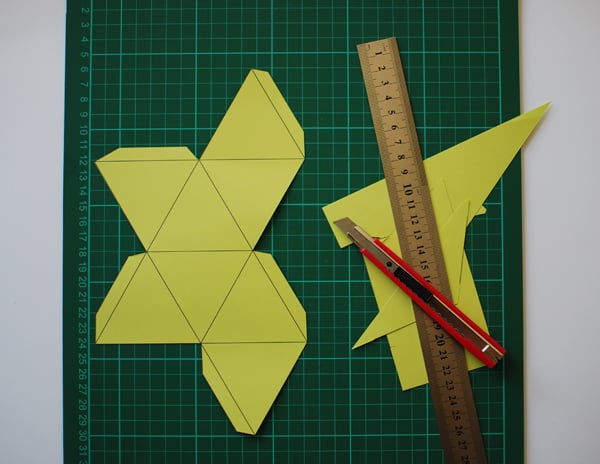 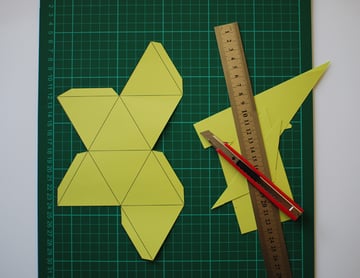 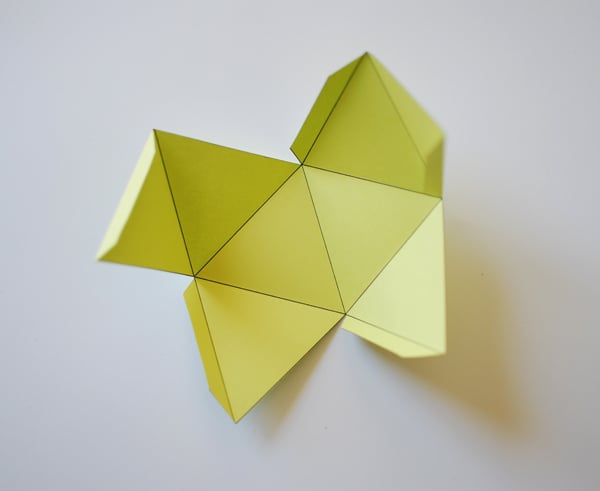 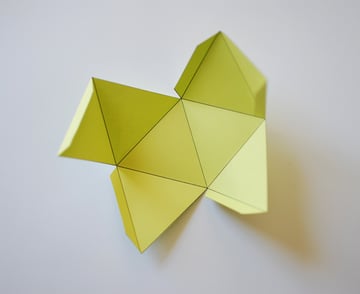 Run glue along one of the flaps, fold the shape and hold the flap and the side together until they are adhered. Repeat with the other flaps until all sides of the shape are glued except one. 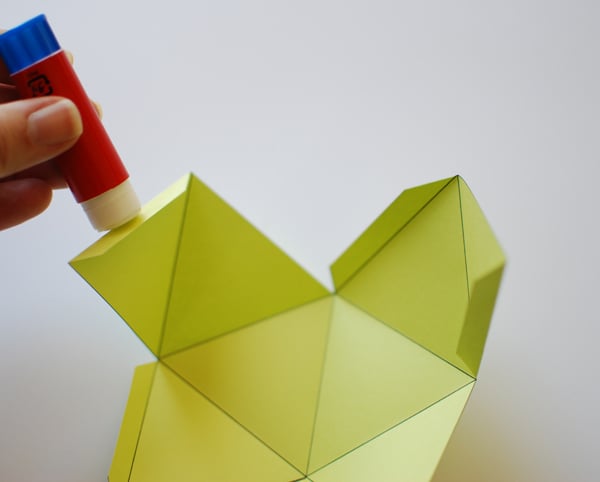 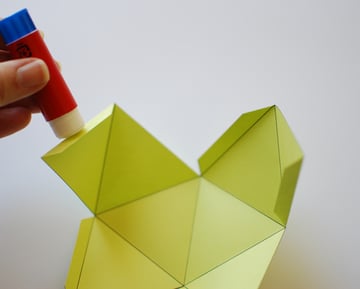 Step 5: Add the Thread for Hanging

Cut small pieces of tape. Lay the end of the thread onto the open corner of the paper shape so it overlaps by a couple of centimetres (a bit less than an inch). Create a loop with the thread and secure it with the tape. Looping the thread will make it less likely to pull out. Press the tape down firmly. Glue the remaining two flaps in place to close the geometric shape. Repeat steps 4 and 5 for all shapes. 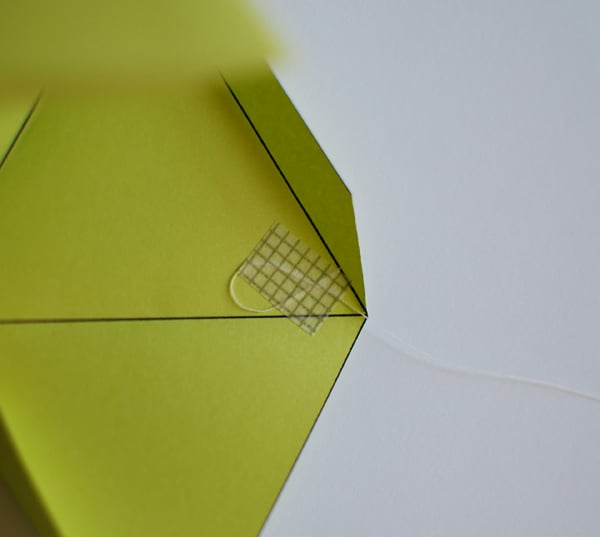 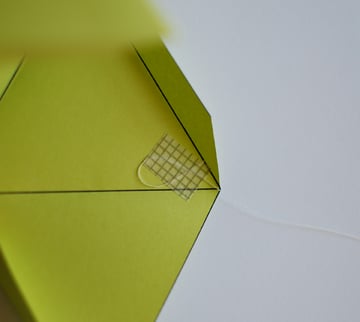 The mobile has five rows: row one has one geometric shape, row two has two shapes, row three has three, etc. Lay the geometric shapes out roughly in rows to work out colour placement. Make sure the threads are straight and don't get tangled. 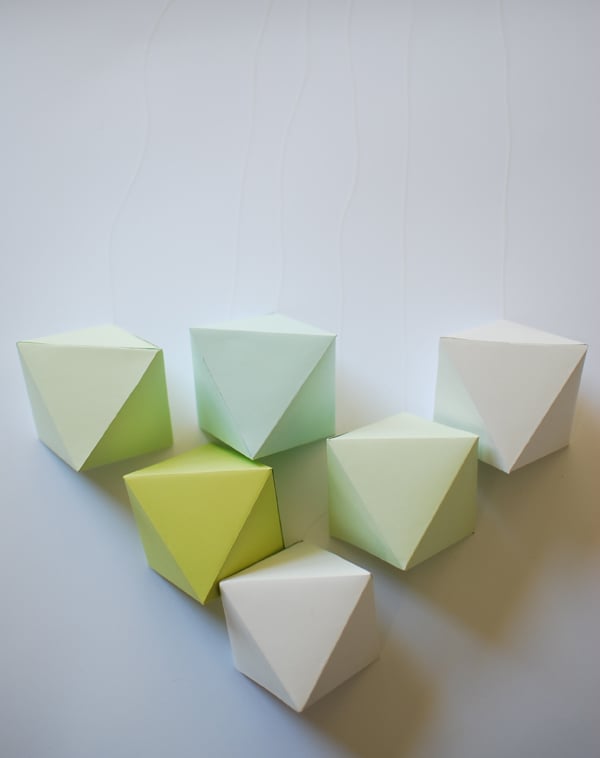 Measure and mark the dowel. Draw small pencil markings at the following intervals:
Metric: 7cm in from the left end, then eight intervals of 4.5cm.
Imperial: 9 marks, 2 inches apart.

Take the first paper shape in row five (the highest row) and secure it to the dowel at the first marking. The shape should hang about 15 cm (6 inches) below the dowel. Wrap the thread around the dowel a few times then tie a knot under the dowel. Cut the loose thread off close to the dowel. 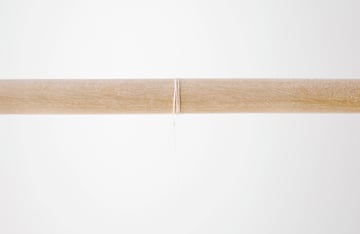 The shapes in this row will hang from every second mark - so marks one, three, five, seven and nine. I wanted an unstructured look, so I suspended the shapes at slightly random heights. if you'd prefer a more uniform look, measure the length of the threads as you tie them so the shapes in each row align.

It will be easier to assemble the mobile if you can suspend it somewhere while you work. I put mine between a shelf and a table, you could try suspending it between the backs of two chairs. 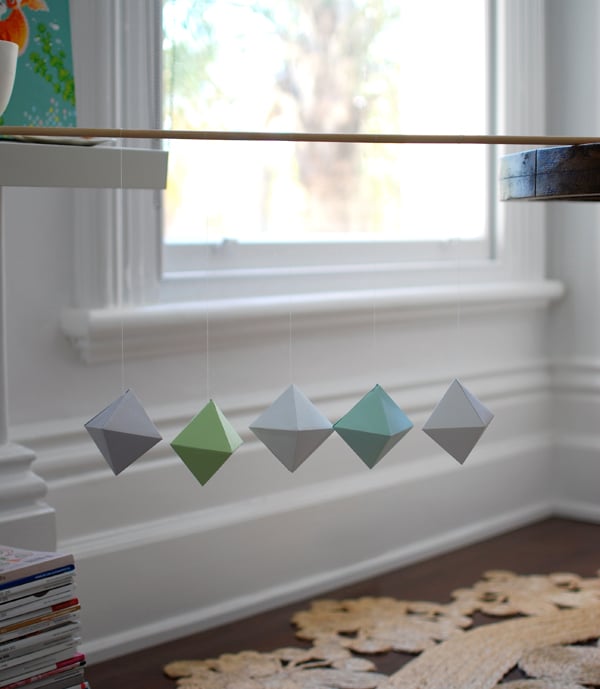 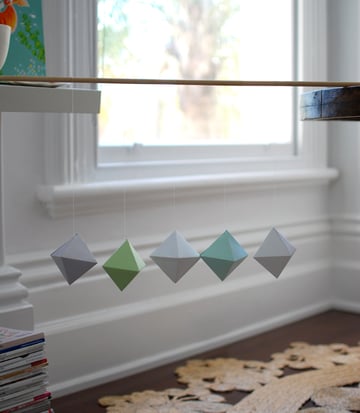 The four shapes in row four will hang between the shapes above, so secure them to marks two, four, six and eight on the dowel.

Row three shapes will be secured at marks three, five and seven on the dowel.

Hang row two shapes at marks four and six, and row one at mark five.

Cut two more lengths of thread about 60cm (24 inches) long to hang the mobile up. Attach one to mark one on the dowel and one to mark nine. Bring the loose ends together to tie around the hook or hanging device you're using.

Hang your mobile from the ceiling, or against a wall like a wall hanging. 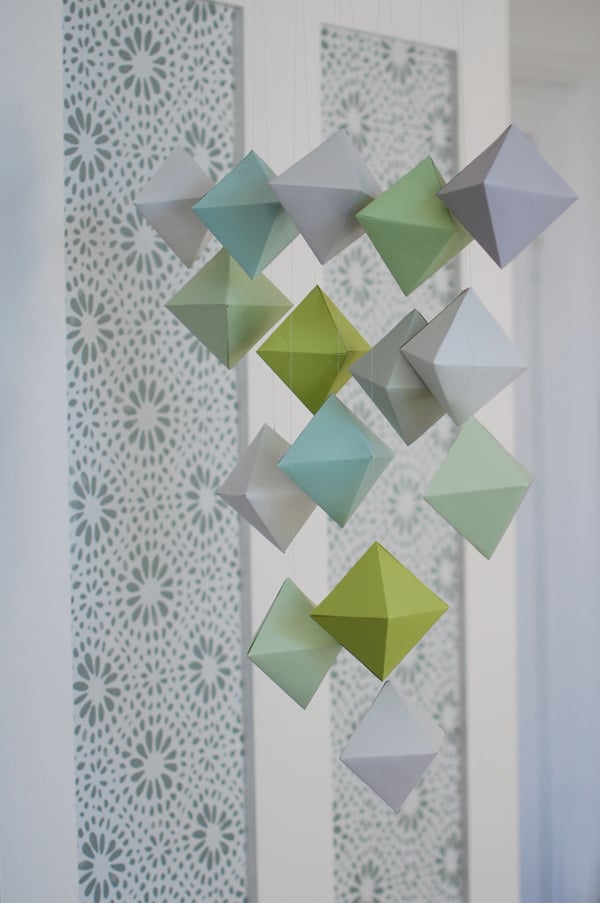 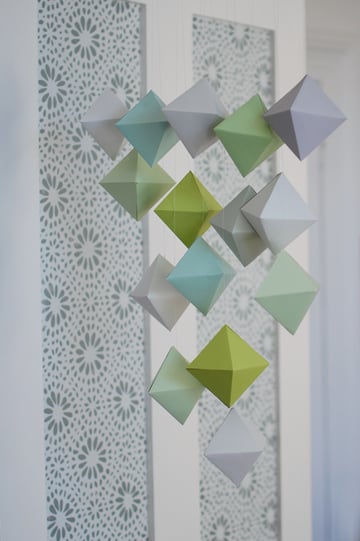 Have you tried making a polyhedron paper shape before? If you have any queries or top tips, let us know in the comments below!

Paper CraftsDecorationsCraft KnifePaperCutting MatSewing Thread
Did you find this post useful?
Yes No
Would you like to provide feedback (optional)?
Cancel Submit
Want a weekly email summary?
Subscribe below and we’ll send you a weekly email summary of all new Crafts & DIY tutorials. Never miss out on learning about the next big thing.
Sign up

Lisa Tilse
Hello! I’m a designer, maker, blogger and a sometime-stylist. I’ve always been drawn to creative expression and I love making, crafting and being surrounded by beautiful things. I design sewing patterns and kits as the red thread and I'm always making or thinking about creating the next craft project to share. My blog the red thread is all about sharing things I find and craft tutorials I create. My digital magazine, SCOUT, is all that and more. It makes me happy to think that I might inspire others to live a more creative life too.
Looking for something to help kick start your next project?
Envato Market has a range of items for sale to help get you started.

After Effects Templates
From $7