While they may not be edible, these Easter pom-pom treats are just as sweet as the real thing. This is a great project for using up any spare balls of yarn in your knitting kit. Use pastel shades for a pretty Easter decoration.

With the cardboard rectangle placed horizontally, choose your first colour and begin wrapping it around the cardboard. Try to keep the wrapping within a 1.5cm width. The more wool you use, the bigger your pom pom will be, so it's up to you how much you want to wrap. Snip the wool off when you're done.

Choose a second colour and begin wrapping, making sure it's tightly wrapped next to the first colour. As this will form one of the middle stripes of the Easter egg, make it a little smaller in width, approximately 0.75cm. Snip off the wool when you're done.

Repeat Step 2 with a third colour.

Complete the wrapping process with a final layer of colour, the same colour and width as the first. Snip the wool when you're done.

Cut a long piece of wool and slip it between the cardboard and the wrapped wool on one side only.

Tie the wool in a tight knot over the wrapped bundle. Slip the bundle off the cardboard.

Wrap the wool around the back of the bundle and tie a knot again.

Slip the blades of the scissors into the loops formed by your knotted bundle and cut all the way around. You should see your pom-pom starting to form. Make sure you don't cut the string tying the bundle together.

9. Trim and Shape the Pom-Pom

Give your pom-pom a bit of a haircut, using the scissors to shape the pom-pom into an egg shape. You can also roll the pom pom gently in your hands to help form the egg shape.

Try making a whole bunch of these little pom-pom eggs in assorted pastel colours. They'd make the perfect Easter egg hunting toys, as you can use them again and again!

You could also tie them on to a branch super-sweet Easter tree decorations, or you could hang your pom-pom eggs off a length of yarn and make an Easter garland. 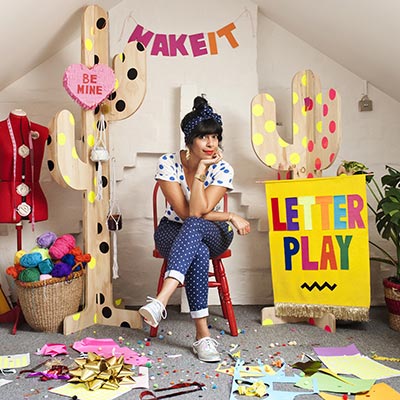 Kitiya Palaskas
Hello! I am a craft-based designer and creative workshop teacher based in Melbourne. When I'm not teaching craft classes or writing DIY projects for various publications, you can find me making tactile, playful and colourful props, costumes, and decorations for the creative industry. Some of my clients have included InsideOut Magazine, Sportsgirl, Lego, City of Sydney, Wolfmother, SBS and Etsy.
kitiya
Weekly email summary