How to Make an Adipose Plush Toy from Doctor Who

It's Doctor Who's 50th anniversary, and to celebrate, you can learn how to make a cuddly plush Adipose toy in this tutorial. The Adipose, for those who may not be familiar with the Whoniverse, are a race of slightly humanoid little blobs of fat. The finished softie will be around 17cm tall, perfect for hanging out on your desk or shelf. For more Doctor Who 50th anniversary goodness, head over to the Vector section of Tuts+ to learn how to make a vector illustration of an Adipose. Enjoy!

1. Print and Cut Out Pattern

Download and print out the pattern. Use a sturdy card stock to make tracing easier.

Using regular scissors, cut out the pattern pieces just outside of the guide line. For the mouth, cut the rectangle around the mouth instead of the mouth directly. I will show you a method for cutting out the mouth in a later step. Carefully cut out the eyes and mouth in the body piece with small scissors or a craft knife.

Take the two body sides and tape or glue them together to form one long strip.

2. Trace Pattern on to Fabric

Trace the tooth onto the white stiffened felt. I'm using stiffened felt because it's easier to trace and cut out. It also gives a cleaner edge than regular felt, but if you can't find it in stores, regular felt is fine. Grab the black stiffened felt. Cut out a rectangular piece about the same size of the rectangle with the mouth.

Spray the adhesive on to the black stiffened felt. Wait for it to get tacky and stick the mouth pattern on.

3. Cut Out the Pieces

With fabric scissors, cut out the fleece pieces with a half inch seam allowance. It is important you make the seam allowance as even as possible.

Cut out the tooth shape.

Grab the mouth piece. Cut out the mouth right outside of the line. Remove the paper. I like to use this technique on dark fabric where it's difficult to see the traced line or to get an accurate cut.

With fabric glue, attach the tooth on to the mouth. Place it on the right side, as shown.

Grab one body piece with the traced line side up. Place the body pattern inside and mark the center of each eye.

Cut a small slit in the marked centers. Turn the body over with the right side up and place the safety eyes on. Turn it over again and secure the eyes with washers. I like to add a few layers of fleece behind the eye before pushing the washers in.

Turn the body to the right side up. Place the body pattern over it and align with the eyes. Take the finished mouth and place it on to the guide. Take the guide off and check to see if it's centered between the eyes. Glue it in place.

Grab all three body pieces. In all pieces, cut out small triangles that go about half way into the seam allowance. This will help make the curves smoother and pinning easier. If you have pinking shears, use those instead. They will save you a lot of time.

Grab the body piece with the face and the long side strip. With the traced sides out, carefully pin the long strip around the body piece. Start at the bottom center of the body and work your way around. Use a lot of pins to secure it together.

Slowly sew the pieces together on the sewing machine. Start at the bottom center and take out pins as you go.

With the one side sewn, grab your pen. Look at the ten marked lines we drew in earlier. At each mark, continue the line all the way over the body side. This is for alignment.

Take the back piece of the body and pin it to the other side. First align and pin at the ten marked areas. Then pin the rest. It is important this is aligned well, so it doesn't come out looking wonky.

Sew the back side on just like you did earlier. You will have a slit at the bottom center where the two ends of the body side meet.

7. Stuff and Close the Body

Turn the body inside out and stuff with polyfil. Start at the top edge and then the other edges. Fill in the center.

With the white thread and needle, close the opening with a ladder stitch.

8. Make the Arms and Legs

Sew the arm and leg pieces, but make sure to leave an opening at the top for stuffing.

Turn each piece inside out and stuff. Close each piece with a ladder stitch.

To define the toes and fingers, lightly draw three lines in each piece like shown in the pattern. Sew each piece whole with the sewing machine on the lines. You can also hand backstitch this if your sewing machine can't sew the thickness.

9. Attach the Arms and Legs

Position the arms however you want. You could put one arm up and one down or both down. I did one arm up. Sew them on using a ladder stitch.

Turn the plush over with the bottom facing up. Position the legs in the center with them pointing out a little. Sew them to the body at the back edge. The legs will be floppy.

You have now completed your own Adipose softie. Isn't it cute? Make more and build an Adipose army. Or try making a larger one. To do that, just increase the scale when printing out the pattern.

I hope you had fun and learned a few new tricks while making this plush! Don't forget to check out the Vector tutorial on how to make a cute Adipose vector illustration. Happy Doctor Who 50th anniversary! 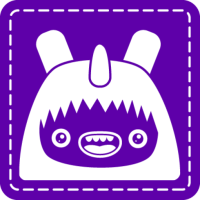