How To Make A Stunning Designer-Look Origami Paper Lantern

Make the designer pendant lamp you've always dreamed of with inexpensive plain white paper and a paper lantern. It will take you a while to create all the origami pieces but it is much easier than it looks and the result is certainly rewarding. And your handmade lantern will be a snip of the cost of a designer piece. Full instructions after the jump.

First, prepare your paper. Use plain A4 paper as it is light and white, however you will need to crop it to a square. Place your paper on the working surface in a landscape position. Mark the center of the larger dimension of your paper. This is 14.85cm (5.5 in). Now mark the same length (14.85cm) along the shorter, vertical side to create two squares.

Place the ruler along the guidelines. Now use a cutter to cut out the squares. Make sure to hold the cutter perpendicular to the cutting surface for precise cuts. Also be sure to place it against the ruler for straight lines.

Since the paper is light you can cut more than one sheet of paper at a time. Just make sure you keep them aligned. Precision in this step is really important as the square shape of the paper needs to be perfect. Cut out about 90 squares - so you'll use a total of 45 sheets of A4 white paper.

Lay one piece of paper flat on the working surface in a square position, with one edge of the square horizontal and the other vertical.

If you choose to make the project with single-sided colored paper, place the colored surface face down. Just make sure the paper is not to thick, because you will end up creating a heavy lantern.

Fold the paper in two by bringing the lower edge upwards until it is aligned with the upper edge.

Crease well. Use a bone folder or the back of a metal spoon for perfectly sharp folds.

Open the paper up. Now fold the paper in two, this time vertically. Bring the left edge towards the right edge, until they are perfectly aligned and then crease well.

Unfold the paper. Now take the lower right corner and bring it up to the the center of the square, where the pleated diagonals meet. Fold and crease.

Repeat the same folding and creasing process for all the corners. Now you should have a small diamond shape, as pictured below.

Fold the diamond in two by bringing the lower right edge upwards until it is aligned with the upper left edge and crease.

Repeat the process. Now, fold the diamond on the other diagonal.

Open up the paper.

By using both hands, place your fingers on the diagonal pleats and gently squeeze the diamond inwards.

Keep pushing it inwards until all the points reach the center and create a cross.

Now fold the triangular flaps and crease. This step is just to ensure neat pleats.

Let the star open up naturally. It should look rather spectacular - just like this.

If you used colored paper it will look like this.

Keep practicing and perfecting your skills until you know how to make a perfect origami star. Now keep folding until you have 90 origami stars. You could do this while watching a film. Nice work! You've now created all the stars needed to create your multifaceted paper lantern.

3. Glue the Origami Stars on to the Lantern

Place the stars on a flat surface to form the pattern you will later recreate on the lamp. Place one column of stars one over the other. The lower corners of the star should touch the upper corners of the other, while leaving a rhombus hole. Nice!

Now make a second column of stars in the same way but shift them half a star up. Place them next to the first column in a way that the corners of the stars enter the fold of the neighboring star. Repeat with more columns. Nice work! This step is necessary so that you're familiar with how to create the pattern, as it's a bit trickier to reproduce on a round surface.

Prepare for the gluing process. First, heat your glue gun. Then place a mat on your working surface. Open up the paper lantern and place it in an upright position with a bowl inside to keep it steady. Now you're ready to go.

Hold the first star from the top and turn it upside-down. Add some glue to the four inner corners and in the area around them. Don't glue the outer edges of the stars as these will not be glued onto the lantern.

Place the star on the lantern and hold in place until it is firmly glued. You need to work quickly and precisely during the gluing process, as the glue sets when it's cold.

It's best to start gluing your stars from the center of the lantern going upwards.

When you reach the top of the lantern, you'll find that there's not enough space to form the pattern properly. Gradually squeeze the stars a bit more so that they can fit on the sphere. Once you reach the top row you will need to alter the pattern slightly. Place less stars, adjust and improvise to make it look as neat as possible.

When the top hemisphere is done, turn the lantern upside-down and glue the stars on the other half.

Light and Enjoy the Pattern!

When the glue has dried and your origami paper lantern is ready, hang it using the wire structure. When it's lit, you will notice how the light beautifully highlights the pattern, as the “holes” appear more luminous.

You can make different projects with the origami star technique. You could try creating some paper star decorations for your Christmas tree or presents. You could also create a 3D wall decoration. And for a completely different look, don't forget that the stars look amazing if you make them with single-sided colored paper.

Do you enjoy paper crafts? How did you go with this tutorial? We'll be glad to answer your queries and hear your comments. 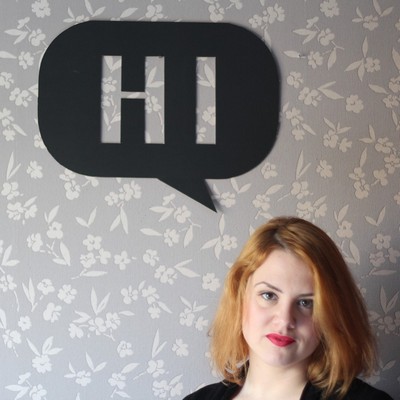 Eleanna Kotsikou
Hello there! My name is Eleanna Kotsikou aka zdrop and sockool for the crafting world. I come from Greece. I have lived in France, Italy, the Netherlands and the UK, but I've never traveled outside Europe. I have studied architecture and urbanism. The creative process from concept to end result is really important for me. I love color. I love design. I dance. I laugh (too) loud.
Weekly email summary