A Brief Guide to Geek Craft

Hello, and welcome aboard! Get yourself settled and join me on a whistle-stop tour to introduce you to the wonderful world of geek craft. Are you completely and utterly obsessed with crafting? Do your fingers twitch uncontrollably without a needle, glue gun or crochet hook to keep them busy? Have your friends and family questioned your unhealthy lust for fabric or beads (hey, what do they know!)? Well, you are most definitely a craft geek... but are you a geek craft geek?

geek noun /gēk/ 1. An unfashionable or socially inept person 2. A person with an eccentric devotion to a particular interest (such as a computer geek) 3. A carnival performer who does wild or disgusting acts

Created in 2009, it now has over 3,000 members and welcomes crafters from all fields who want to share their crafty projects inspired by movies, television shows, comics, video games and other icons of geekdom. If you're still wondering if geek craft is for you, they pose the following simple question to help you decide. Answer yes, and this is most definitely the community for you to meet like-minded geek crafters!

Have you ever: Missed important plot points in a film or television show because you were trying to figure out the construction of a character's hat or scarf? Studied your favorite animal character for hours so you could make an accurate amigurumi or plush about it? Drooled over official merchandise such as a sweater or socks, but never able to afford it? Or maybe you just weren't satisfied with it and wanted to perfect it yourself? Been watching something and suddenly had the urge to MAKE A CAKE ABOUT IT?
Geek Crafts 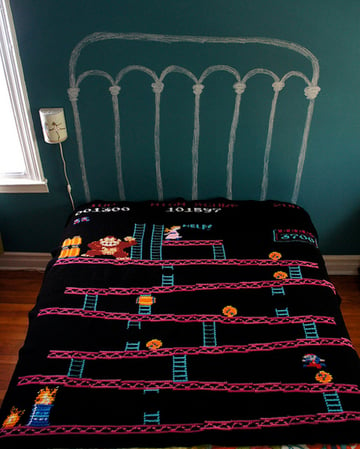 Video games and crafting truly are a match made in heaven. Think about it, from cross stitch to perler beads, knitting and crochet to quilting, each and every one of those craft techniques can work those pixels to perfection.

Nowhere is this better demonstrated than over at weelittlestitches, purveyors of pixel people cross stitch patterns, or by the wonderful Donkey Kong blanket made by Ana Petree Garcia. Old school Nintendo and arcade games like Pac Man, Space Invaders and Tetris are all firm geek craft favourites. Check out Sprite Stitch, a community entirely devoted to all things video game, for patterns and general inspiration. 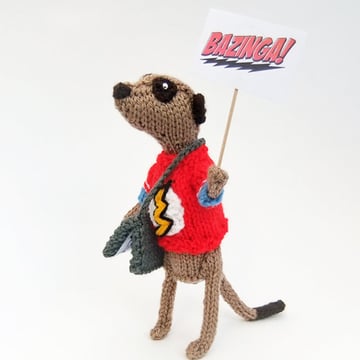 Well, we couldn't talk geekery without mentioning The Big Bang Theory now, could we? Not only have the lovely Sheldon, Leonard, Howard, Raj, Penny and Amy Farrah Fowler made science cool, they have also spawned a whole sub-genre of geek craft inspired by the programme. From crochet amigurumi Sheldon Cooper dolls to cross stitch patterns that ensure you will never forget the rules for Rock, Paper, Scissors, Lizard, Spock; the geek crafters have it covered.

But our favourite science nerds are only the tip of the iceberg when it comes to TV-related craft obsessions. Pretty much any cult/niche television programme you can think of will, at some point, have spurred a dedicated geek to get their craft on and produce a marvelous creation in homage to their favourite show. From old favourites such as Star Trek and Buffy The Vampire Slayer to more recent shows such as Game of Thrones, Breaking Bad and The Walking Dead. However, I suspect that no show is more popular in geek craft circles than the Doctor himself...

The Doctor Will See You Now 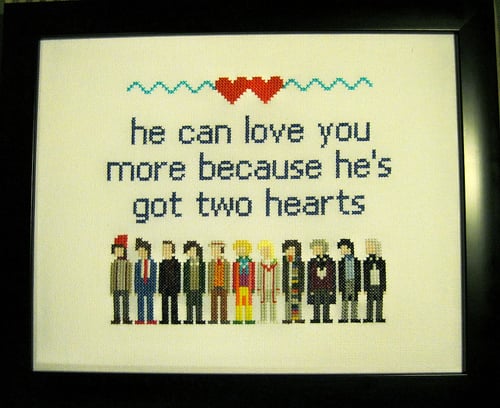 Want to make your very own authentic Doctor Who scarf (or whip up a pair of TARDIS socks)? Of course you do, and thanks to wittylittleknitter you can! I think it's safe to say that the crafting community loves to geek out over Doctor Who. You only have to look on Craftster to see there is a whole lot of TARDIS love to be found out there. Heck, there is even a dedicated Doctor Who Crafts group over on Flickr.

Crafter, Walk with Me

I'm sneaking this one in because as a big ol' David Lynch fangirl, I'm always rather excited to stumble across any Lynch-related craft geekery. Twin Peaks was a particular favourite of mine, so I couldn't resist these damn fine Log Lady brooches from illustrator Kate Rowland.

Kate also produces some pretty sweet Napoleon Dynamite-inspired goodies that are definitely worth checking out too. And with that rather unsubtle hop, skip and a jump we move neatly to the big screen! Movies provide geek crafters with an abundant supply of source material, from blockbusters like The Hunger Games to cult favourites such as Ghost World and The Royal Tenebaums.

May the Force Be With You

As you might imagine the Star Wars films are responsible for a whole lot of geek craft. They have even inspired two geektastic exhibitions of handmade goods, Stitch Wars and Stitch Wars Strikes Back, at the Bear and Bird Boutique + Gallery. 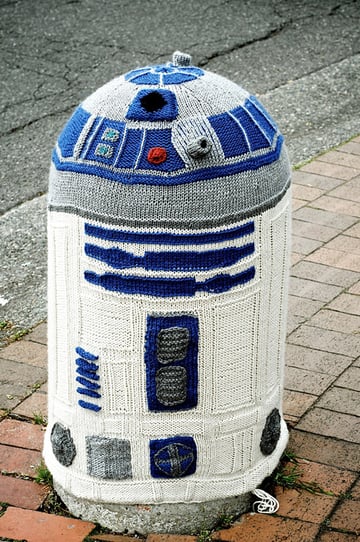 One of my very favourite pieces of Star Wars-related craft geekery is, without doubt, this rather wonderful R2D2. The mastermind behind this genius yarn bomb is Sarah Rudder. If you fancy creating your own version, Sarah has kindly shared her pattern on Ravelry.

Snitch One, Purl One

The boy wizard is another hugely popular inspiration for geek craft as a quick google for Harry Potter crafts illustrates. You can make your own Harry Potter-style wand, rock some Luna Lovegood-style radish earrings, knit a House Unity Scarf, or crochet a Golden Snitch. And that's just for starters! You can even sew up your very own Harry Potter doll from a free pattern designed by craft superstar Heidi Kenney of My Paper Crane.

It's not all just television and movie frippery. Geek crafters have a whole lot of love for science and technology, be it hand-knitted techno gloves that allow you to use your touch screen phone and keep your mitts warm at the same time; a crochet coral reef that has been exhibited in art galleries and science museums worldwide; or an eight metre giant squid called Plarchie, made entirely from plastic carrier bags, that likes to hang out in London's Natural History Museum. 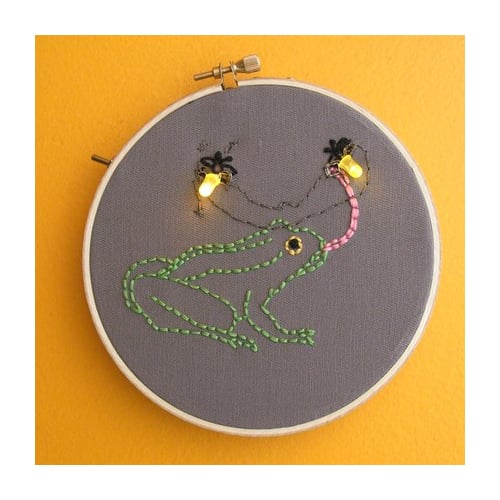 There is certainly lots of fun to be had for crafters who like tinkering with technology. Why not give electronic embroidery a go, or make yourself a Space Invaders tote bag with eyes that twinkle when your mobile phone rings. As technology continues to develop and geeky crafters continue to play with them, the possibilities really are excitingly endless.

Get Your Geek On

Feeling inspired? Want to get your geek craft on without delay? Then be sure to check out some of these awesome websites and blogs dedicated to geek crafts and DIY projects.

The Star Wars Craft Book by Bonnie Burton Go over to the craft side! An absolute must for any Star Wars-loving crafter

Manga Cross-Stitch: Make Your Own Graphic Art Needlework by Helen McCarthy Learn the tricks of Japanese graphic art and the skills of traditional needlework all in one geektastic book.

Stitch London: 20 Kooky Ways To Knit The City And More by Lauren O'Farrell Love crafting? Love London? Then this is the book for you! A little pigeon tells me there will soon be a Stitch New York edition flying its way to bookstores too.

So there you go, a very brief overview of the wonderful world of geek craft. If I've missed out your favourite geek crafter, genre or blog (which I undoubtedly have!) please do share by leaving a comment. I would also love to see and hear all about your geeky craft adventures, so be sure to hit me up below. I look forward to reading all about them!